This version of SpeedyGA can be downloaded from Google Code.

Here’s a visualization of the bit dynamics of an SGA with 1pt crossover when applied to the the Royal Roads fitness function. Going by the building block hypothesis one expects to see the dots marching orderly to the top of the plot in groups of eight or more.

That’s not what happens. Instead, one gets to see hitchhiking in action—look for a swift downward movement of certain dots in tandem with the swift upward movement of other dots at close by loci. 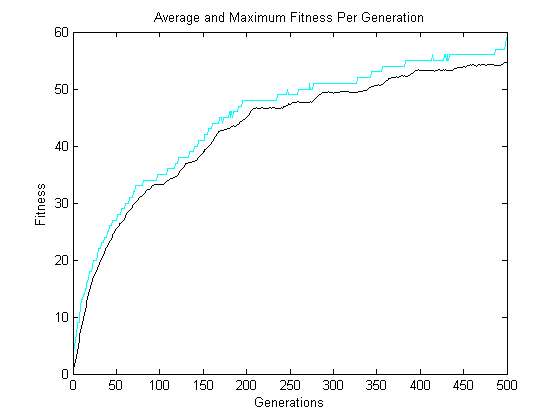 The matlab code used to generate these and other figures in this blog post can be found here.

Let’s visualize the bit dynamics of a population when an SGA with uniform-crossover is applied to the Royal Roads function.

END_OF_DOCUMENT_TOKEN_TO_BE_REPLACED

With VectorGA being downloaded from Matlab Central over 611 times in the past 30 days, I thought I’d release some of the tweaks I’ve been using to speed it up. I’m calling the result SpeedyGA .

SpeedyGA is a vectorized implementation of the Simple Genetic Algorithm in the Matlab programming language.

Matlab is optimized for performing operations on arrays. Loops, especially nested loops, tend to run slowly in Matlab. It is possible to significantly improve the performance of Matlab programs by converting loops into array operations. This process is called vectorization. Matlab provides a rich set of functions and many expressive indexing schemes that make it possible to vectorize code. Such code not only runs faster, it is also shorter, and simpler to understand and change (provided that you know a little about Matlab of course).

Genetic Algorithms that are implemented in C/C++ or Java typically have multiple nested loops. Therefore direct ports of such implementations to Matlab will run very slowly. Many of the nested loops found in a typical GA implementation have been eliminated from SpeedyGA. The resulting code is short, fast and simple. It is indeed a delightful coincidence when the constructs of a programming language match a programming task so well that a program can be written this succinctly.

SpeedyGA is proof that Matlab is a useful language for the rapid prototyping of Genetic Algorithms. This, in addition to Matlab’s extensive data visualization capabilities, make Matlab an extremely useful platform for the experimental analysis of GAs.

SpeedyGA has been created and tested under Matlab 7 (R14). Out of the box it evolves a population against the one-max fitness function. The royal-roads fitness function has also been included but is not currently being called. If you find vectorGA useful or find any bugs please let me know.

SpeedyGA is a revision of the old VectorGA. SpeedyGA has (not surprisingly) been further optimized for speed.