In this blog entry I’d like to showcase just one of a number of remarkable findings that comprise the basis for the generative fixation hypothesis—a new explanation for the adaptive capacity of recombinative genetic algorithms.

Consider the following stochastic function which takes a bitstring of length

as input and returns a real value as output.

The expected fitness of each of the 16  “genotypes” of ABCD is shown below. 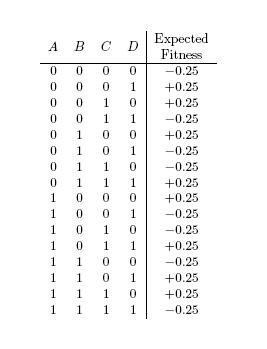 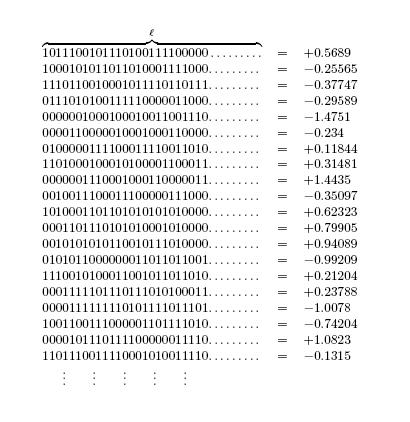 The next figure shows the locations of the pivotal loci A, B, C, D in this hypothetical scenario.

Consider the problem of classifying loci as pivotal or non-pivotal given only query access to the fitness function. This problem is closely related to the problem of finding the effective attributes of a parity function studied by Uehara et al.  [1,2]. One big difference is the presence of a stochastic element in the problem currently under consideration. Before reading further, I invite you to think of an algorithm that can solve this problem relatively robustly (with not more than, say, a 0.005 chance of misclassification per locus).

It turns out that a genetic algorithm can be used to tackle this problem far more cheaply.

Observe that the red dots diverge to the top or bottom of the plot, whereas the blue dots remain in the middle. After 500 generations, the location of the pivotal loci A, B, C, and D can simply be “read off” by examining the one-frequency of each of the 200 loci in the final population. Note also that the genotype of ABCD that goes to fixation is 1011. This genotype has odd parity, which explains the increase in the average fitness of the population shown in the following figure. 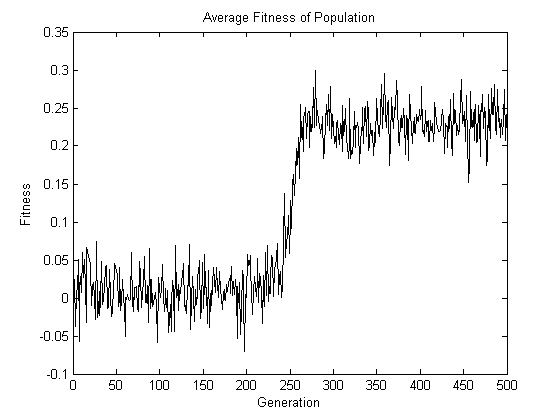 Now for the two-part punchline. First, there is nothing special about the location of the four pivotal loci. In other words, the expected number of generations required for the four red dots to diverge to the top or bottom of the plot remains the same regardless of the location of these dots. Second, there is nothing special about

= 200. In other words, the behavior of the red dots will be unaffected by the number of blue dots present, and each blue dot will have the same behavior regardless of the total number of blue dots. Both these conclusions can be arrived at by appreciating the symmetries present when

is applied to the fitness function described above (or rather, to the class of fitness functions described). Readers looking for a more rigorous treatment are referred to chapter 3 of my dissertation.

The animation below shows the result of applying

to the fitness function when

The average fitness of the population over 500 generations is shown below.

The final animation shows the result of applying

to the fitness function when

The average fitness of the population over 500 generations is shown below. 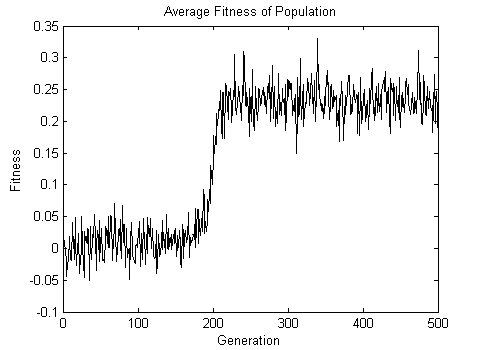 Note that in keeping with the assertions made above, the number of generations it takes for the red dots to diverge remains approximately the same despite an increase in

by two orders of magnitude.

I hope the experience of watching evolutionary computation in action sparks your curiosity about the generative fixation hypothesis. Feel free to email me your questions and comments.

Click here to see the Matlab script used to generate the results presented above.